Young people are growing up in an increasingly globalised society. Scientific and technological developments are constantly transforming our capacity to communicate across the world. We use the internet, television screens to follow events as they happen, be they natural disasters or business, political and sporting events. Similarly, we can communicate instantly by e-mail, social networking or mobile phone across the world.

Our school community reflects the cultural diversity of Haringey and has always focussed on to the international dimension across the curriculum.  Students are provided with opportunities to participate in a range of activities and our extensive experience resulted in the school achieving an International Schools Award. 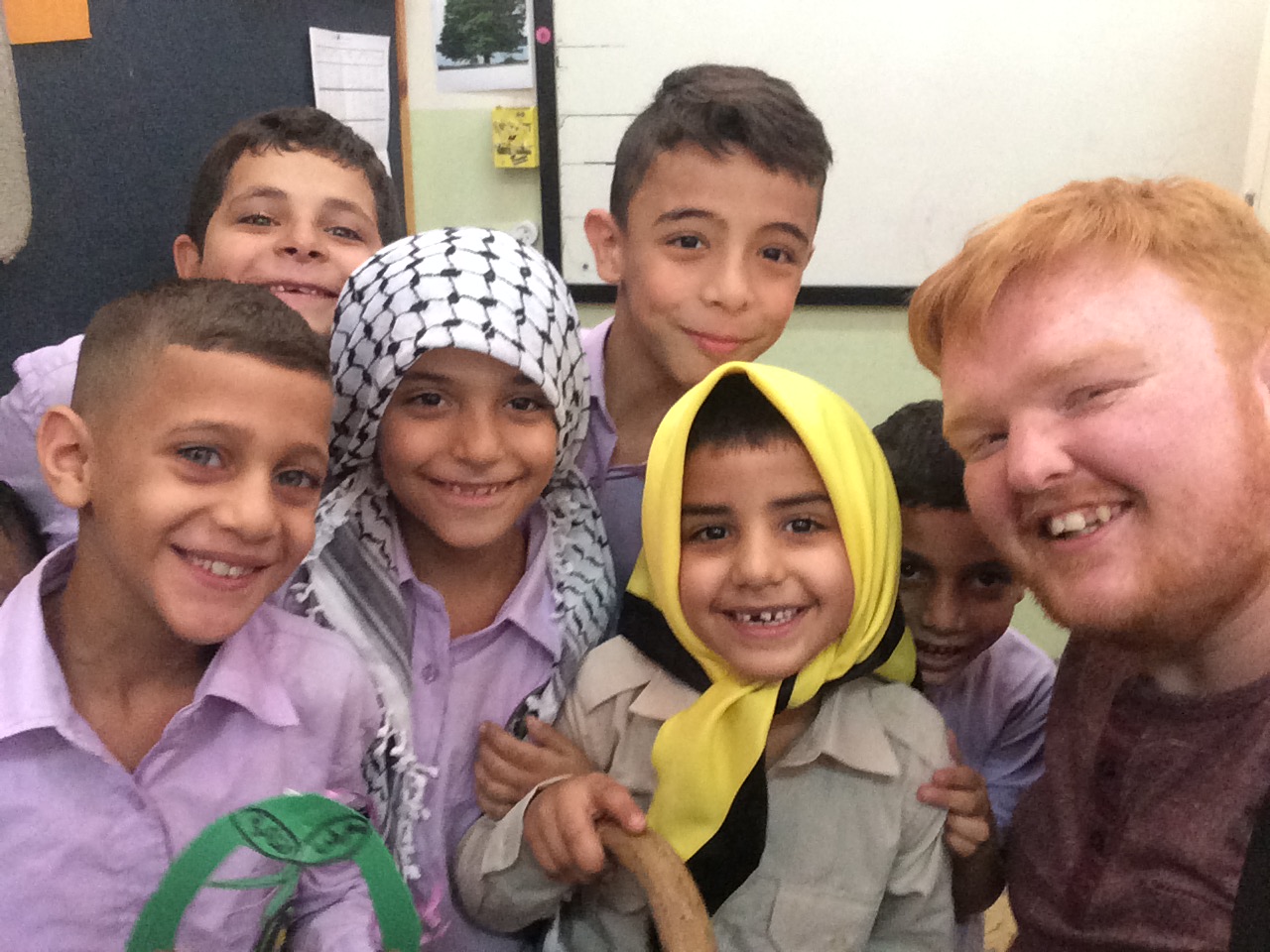 Two Woodside teachers, Mr Beaumont and Mr Watson, travelled on an exciting and thought-provoking journey to Palestine over the October half term. As part of an Erasmus + programme (EU funded), they met with Palestinian teachers, learned about schools and schooling in Palestine and worked to strengthen links between young people in London and Palestine.

Travelling with CADFA, the Camden Abu Dis Friendship Association, Mr Beaumont and Mr Watson were building on school and youth lin­k­s developed since 2006. The October visit to Palestine mirrored the January exchange and included a residential held at a former British jail near Nablus; school visits in Abu Dis, tiny backstreet schools in Jerusalem’s Old City and to a Bedouin primary school in the desert; and a conference.

Mr Watson commented that “The whole visit was an amazing experience. We had the opportunity to work with some fantastic teachers and meet with some incredible people. We learned so much. It was inspiring to see how they faced the challenges of living in Palestine and I hope to bring back the same ambition and motivation to our students.”

Mr Beaumont and Mr Watson learned about the pressures on schools and on children living with daily challenges, such as restricted freedom of movement, encounters with the military and, sometimes, harsh punishments within schools. They helped to plan positive projects, such as taking letters and postcards from Woodside students to open communications between young people to help foster understanding. 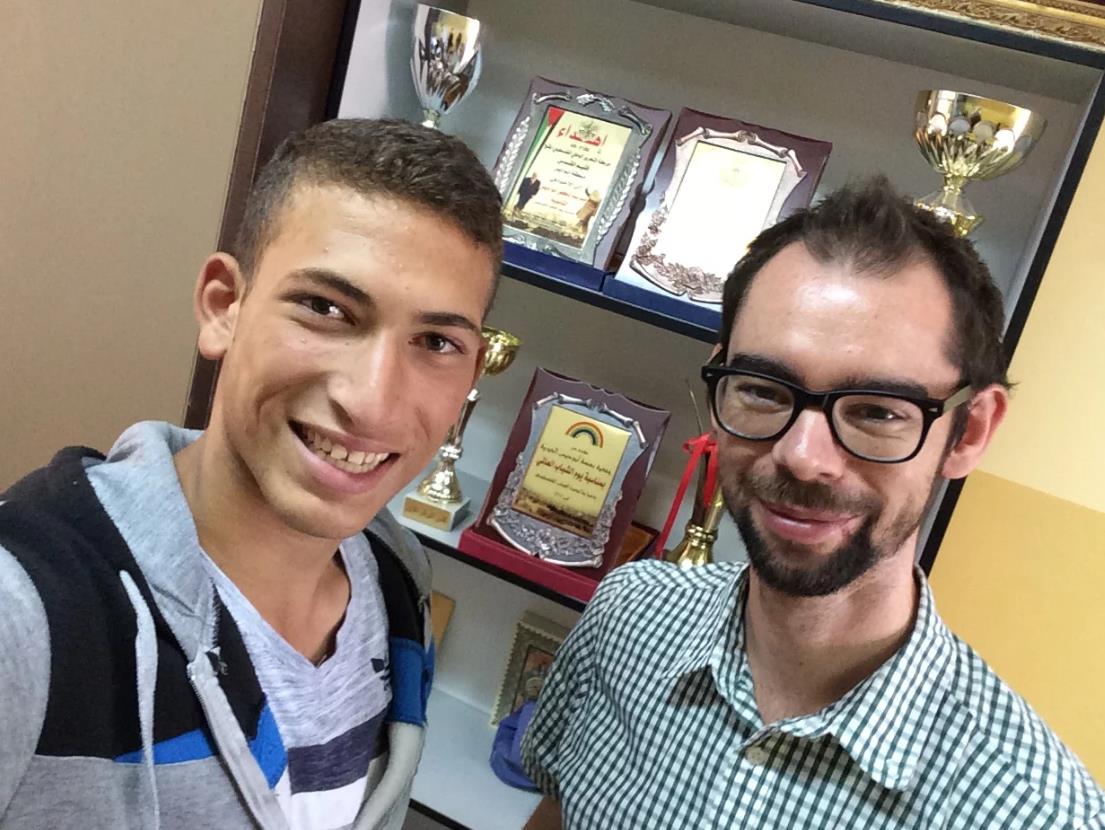 Two schools in Abu Dis, the Nehru School and Abu Dis Boys School, are keen to make closer ties with Woodside High School. Students at both schools will have the opportunity to join a Twinning Club. The Club will provide the opportunity to send letters, ask questions and even take part in video conversations between students. Already, teachers from both schools have been sharing teaching methods, student support ideas and exchanging ideas.

Hopefully, there might also be an opportunity for Woodside to welcome teachers and students from Abu Dis as warmly as Mr Beaumont and Mr Watson were welcomed to Palestine. 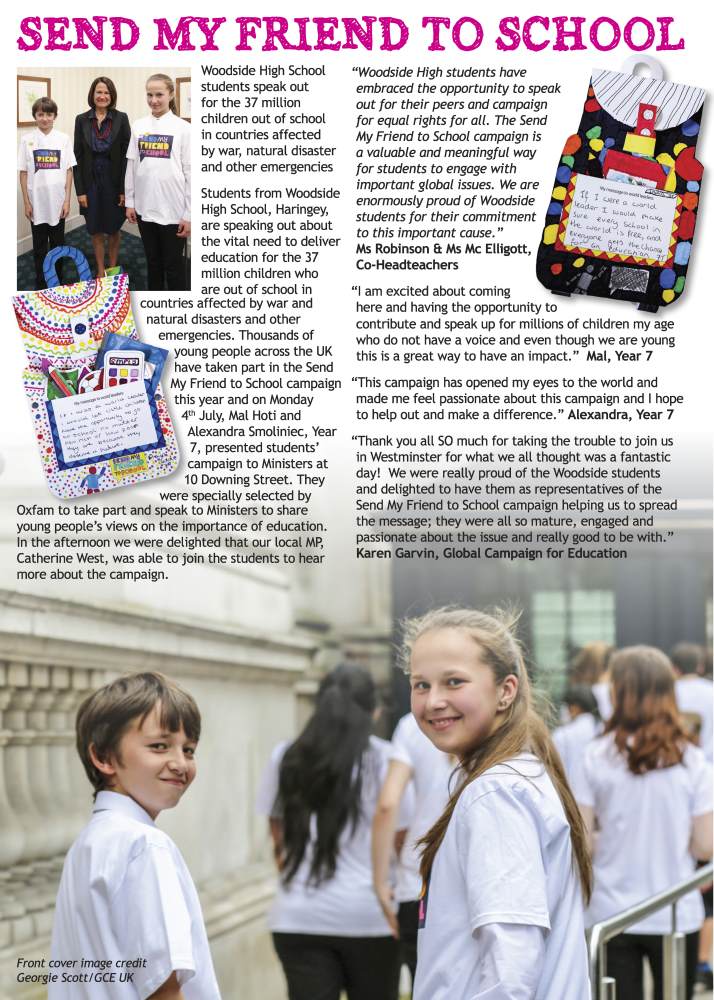 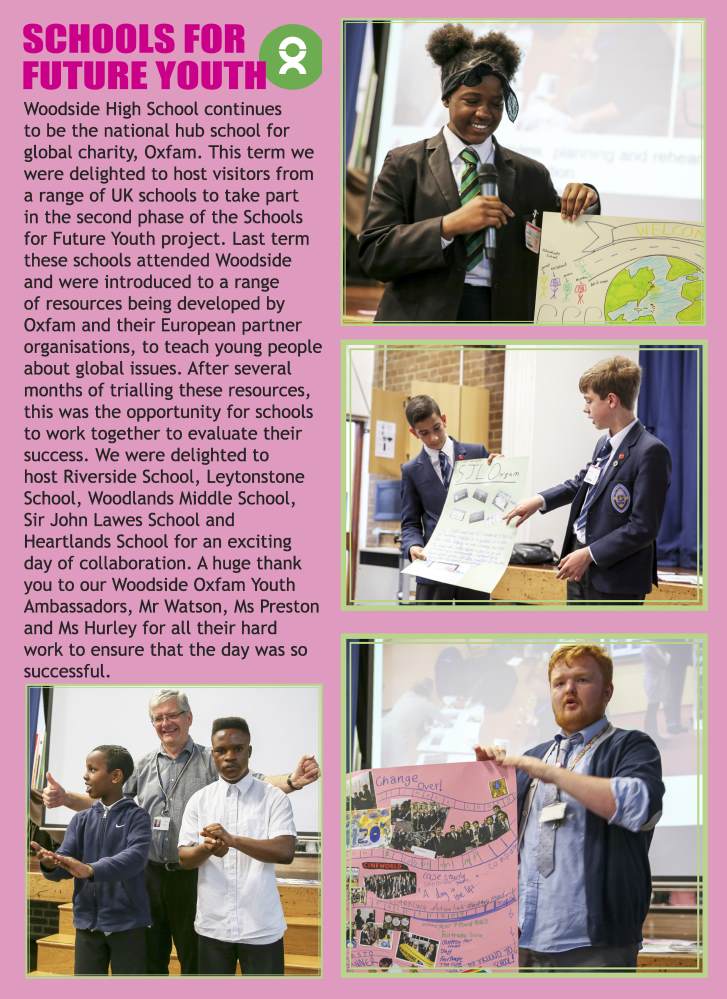 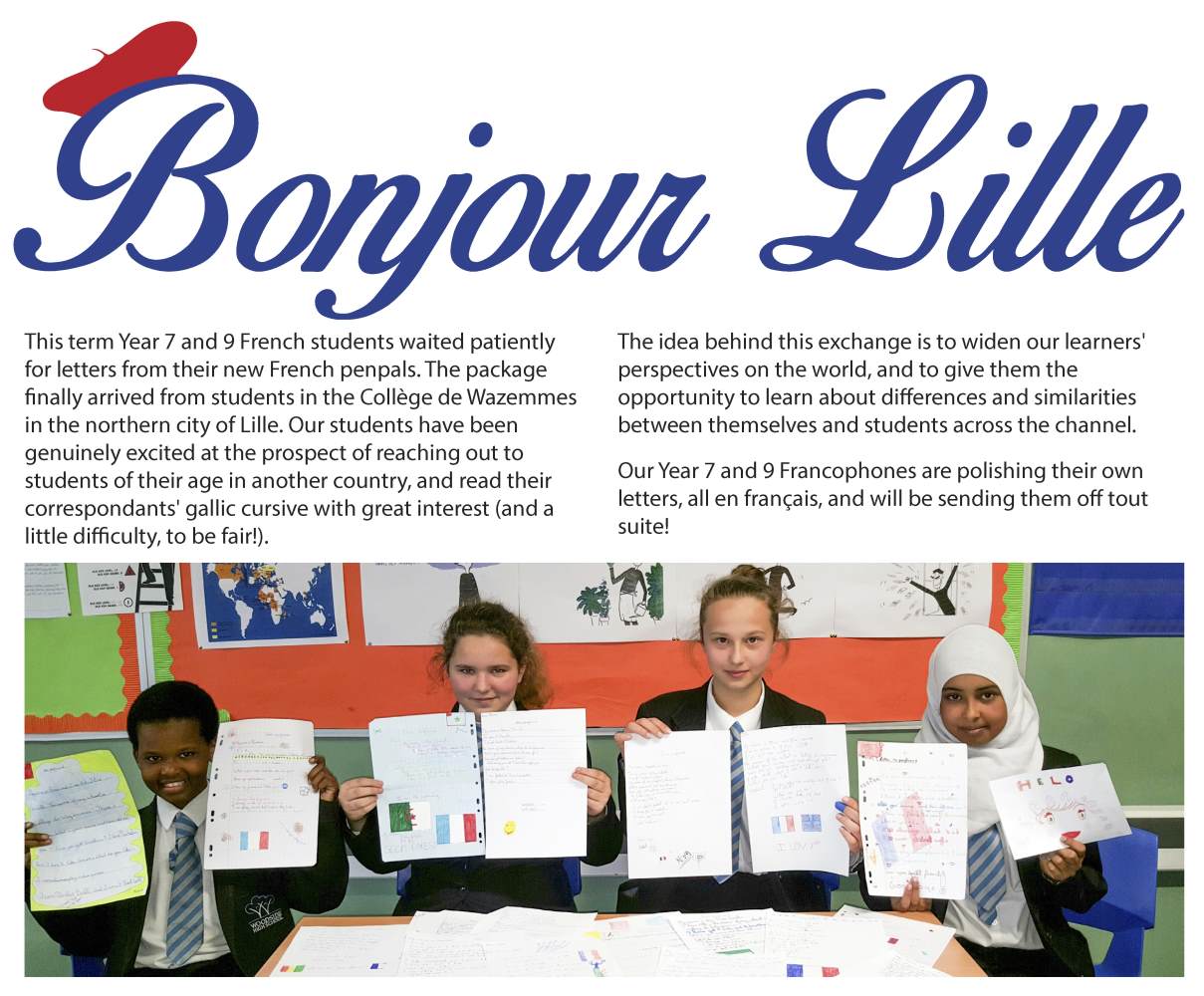 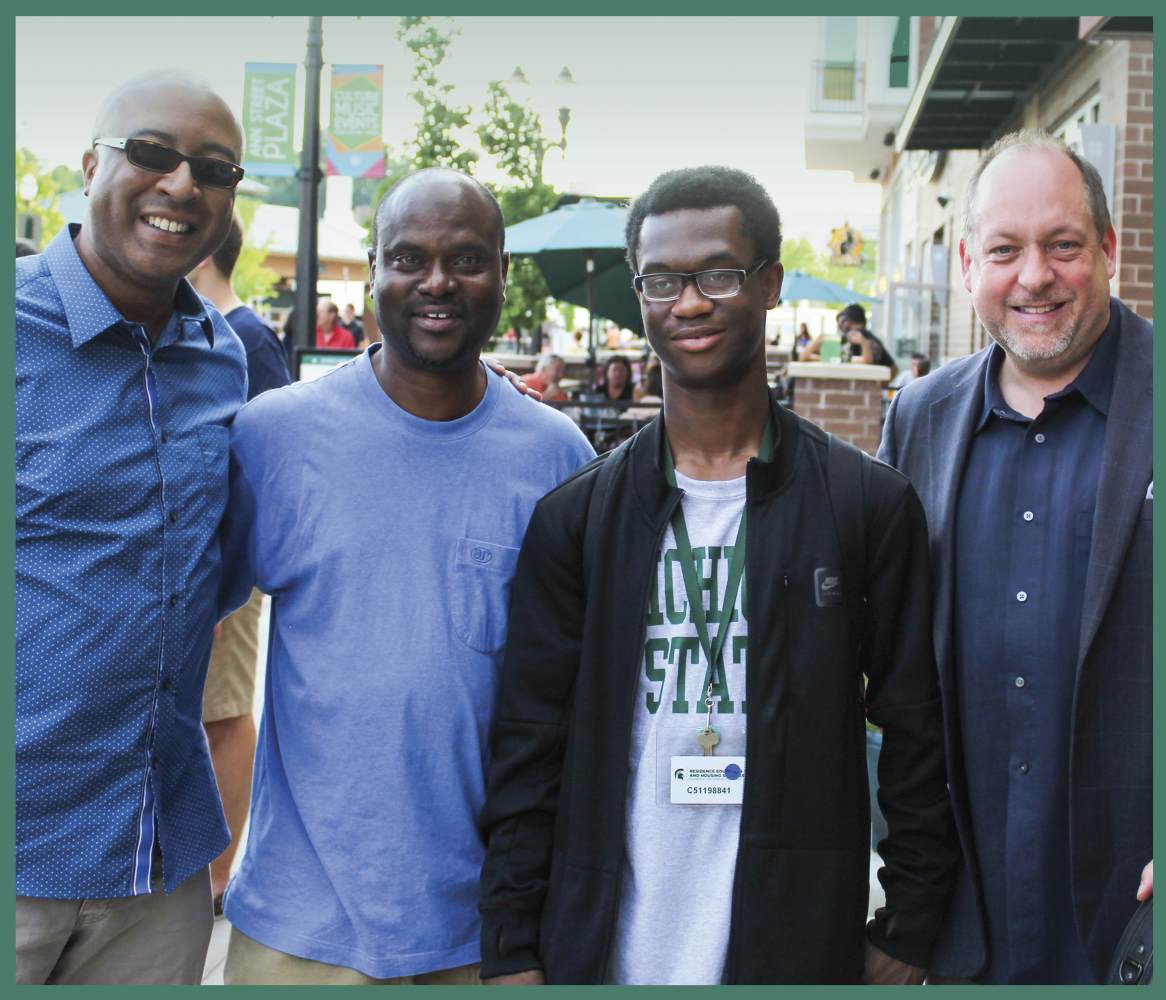 Jazz, cool and hot, with talented young jazz musicians, in Michigan’s baking summer heat!
This best describes the 2016 Big Band Symposium staged by the Michigan State University’s College of Music, led by Rodney Whitaker, Distinguished Professor and Director of Jazz Studies, from June 13th to 20th 2016 . It was attended by 40 participants from various parts of the US, including, for the first time, one from the Caribbean island of Tobago, and one from the UK (Sultan Stevenson from Woodside High School).
The annual summer program, which began in 2014, is aimed at advanced jazz students aged between 14 and 20. Admission to the program is by invitation only: candidates are asked to send in three audition videos covering classic jazz compositions such as alto saxophonist Charlie Parker’s ‘Billie’s Bounce’. If successful, they are granted a scholarship giving them free boarding, transportation and meals during the Symposium.
Students experienced an intense practice and instruction regime with classes for four hours a day. Attendees were also split into three groups and assigned to jazz professors. Groups were named after legendary jazz recording labels – Blue Note, Verve and Atlantic. It goes without saying that the level of musicianship this year was high.
Associate Professor of Jazz Trumpet Etienne Charles said: “this year was without doubt our best Symposium. All of these young people were fabulous and their futures are assured”.
Sultan Stevenson said: “I was quite privileged to have been exposed to such a fantastic learning experience with very talented musicians. I have raised my jazz theory and practice levels by several notches.”
Some students were given opportunities to have one to one sessions with outstanding visiting jazz luminaries such as pianist Marcus Roberts, who is also a professor of music at Florida State University. They also performed during the Jazz & Blues on the Grand festival (June 15th) in Lansing and the Summer Solstice Jazz Festival (East Lansing) on June 18th to large and appreciative audiences.
Huge congratulations to our incredibly talented musician, Sultan Stevenson who was the only student from the UK selected to take part in the Big Band Symposium. We are all incredibly proud of Sultan 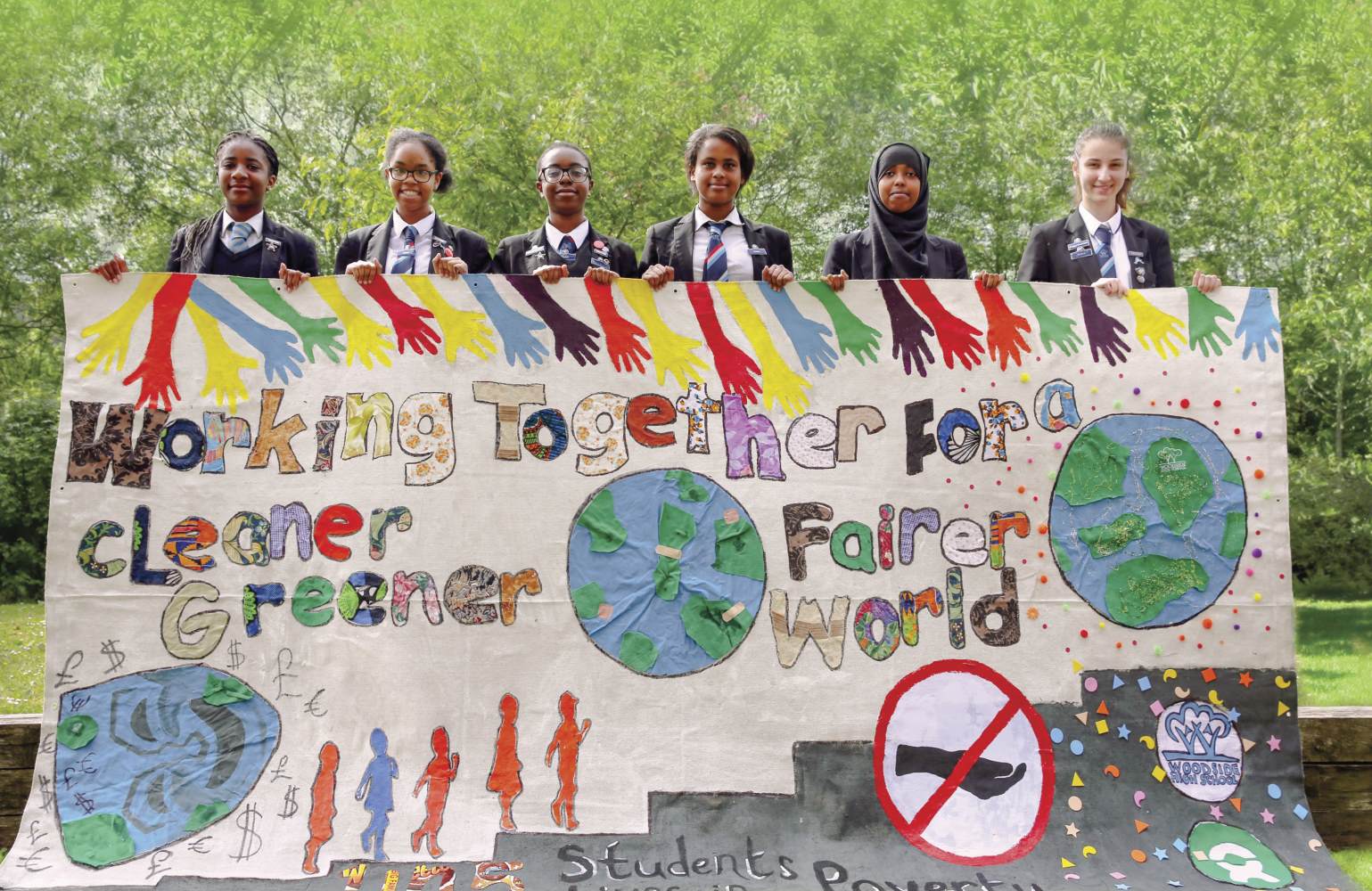 Our Oxfam Youth Ambassadors had an amazing opportunity this term to create a banner which was displayed on stage at the Glastonbury Festival. Ms Preston and Mr Watson worked with the Ambassadors to create a banner which reflected the key messages that they wanted to share with the festival and its global audience. As you can see from the photograph, the end result was stunning!

The Oxfam Youth Ambassador programme gives students the opportunity to learn more about important global issues. The chance for students to share their message at Glastonbury has absolutely captured their imaginations and they have worked incredibly hard on the project.

“Woodside High’s Oxfam Youth Ambassadors have really embraced the challenge of visually communicating their take on Glastonbury and Oxfam’s shared vision of a cleaner, greener, fairer world. This has been a wonderful opportunity for students to engage with key issues and express themselves through art.”
Ms Preston, Art teacher & Oxfam Youth Ambassador lead

“I have really enjoyed working on this project. We all worked together to create a design that communicated our message. We are so excited about our banner being displayed at Glastonbury. We hope that it will inspire people to take action and help create a cleaner, greener, fairer world for all.”
Kleida Nanaj, Year 10 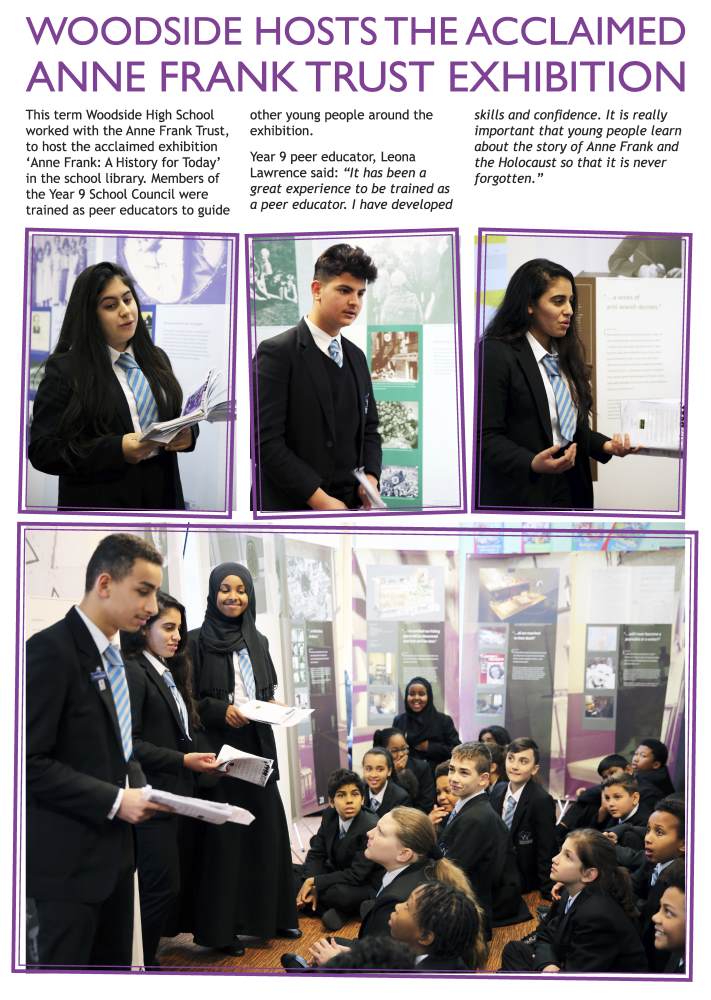 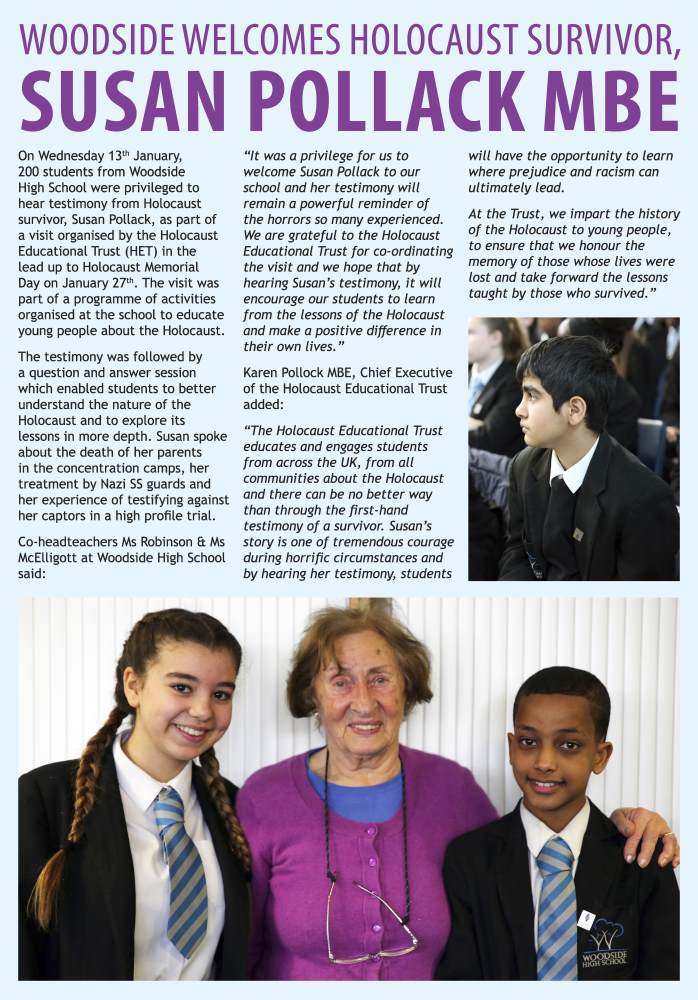 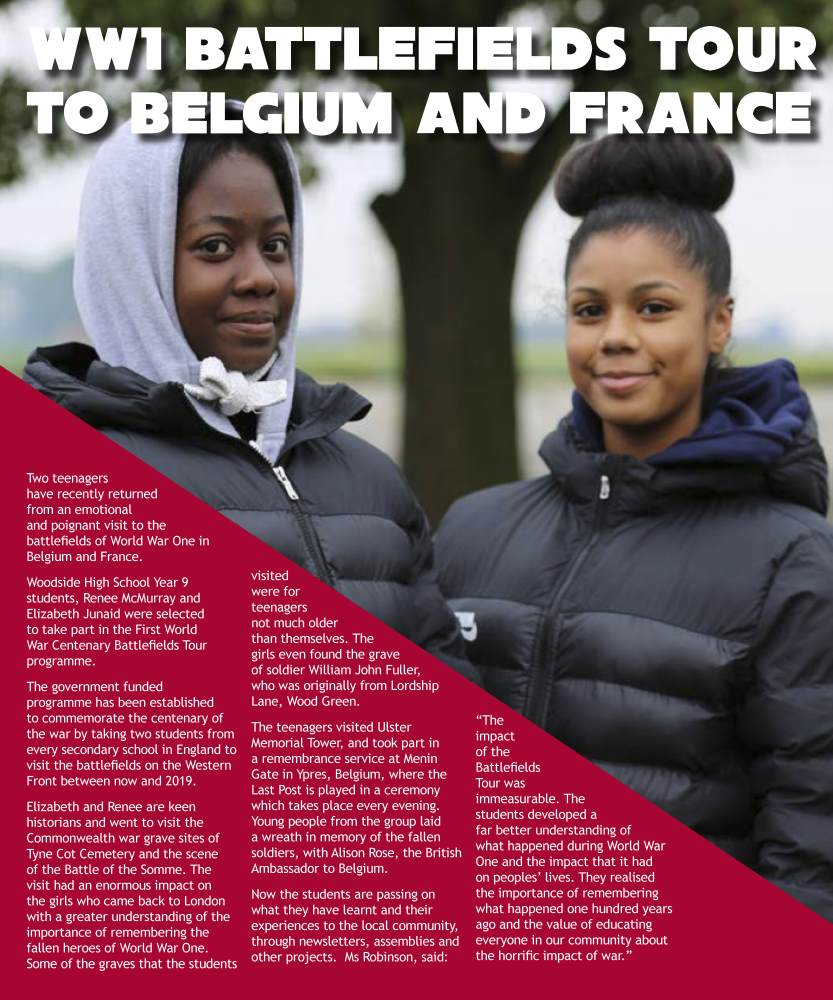 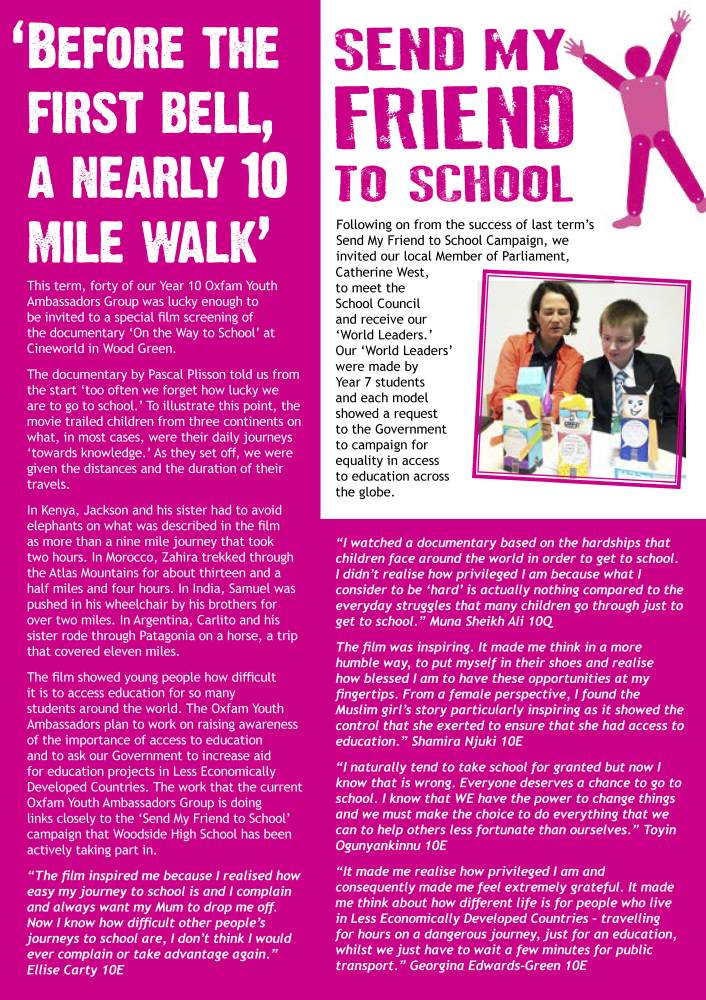 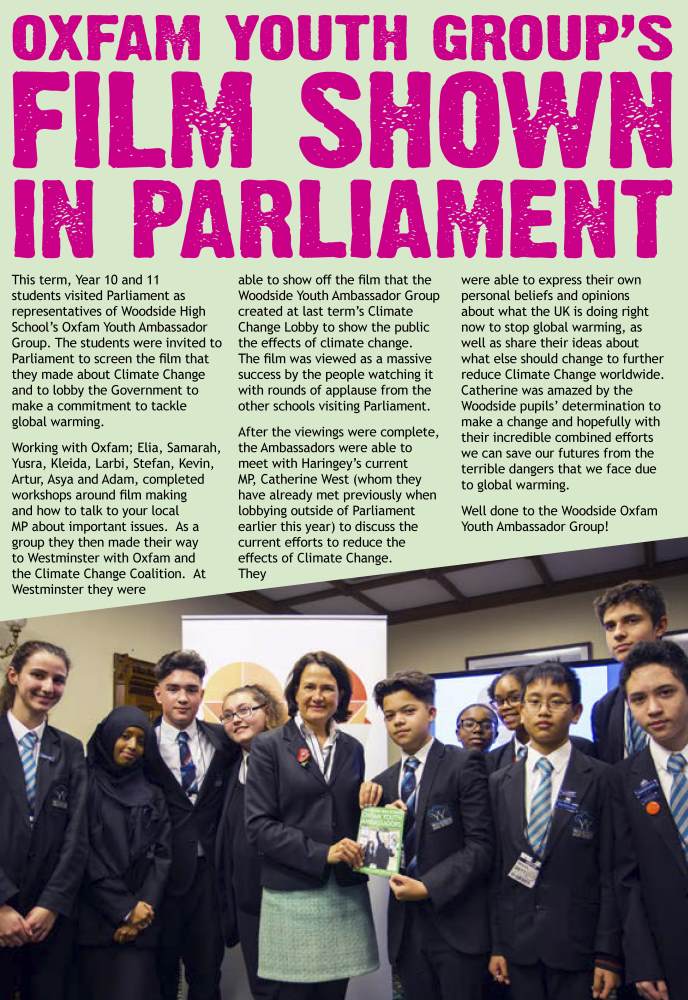 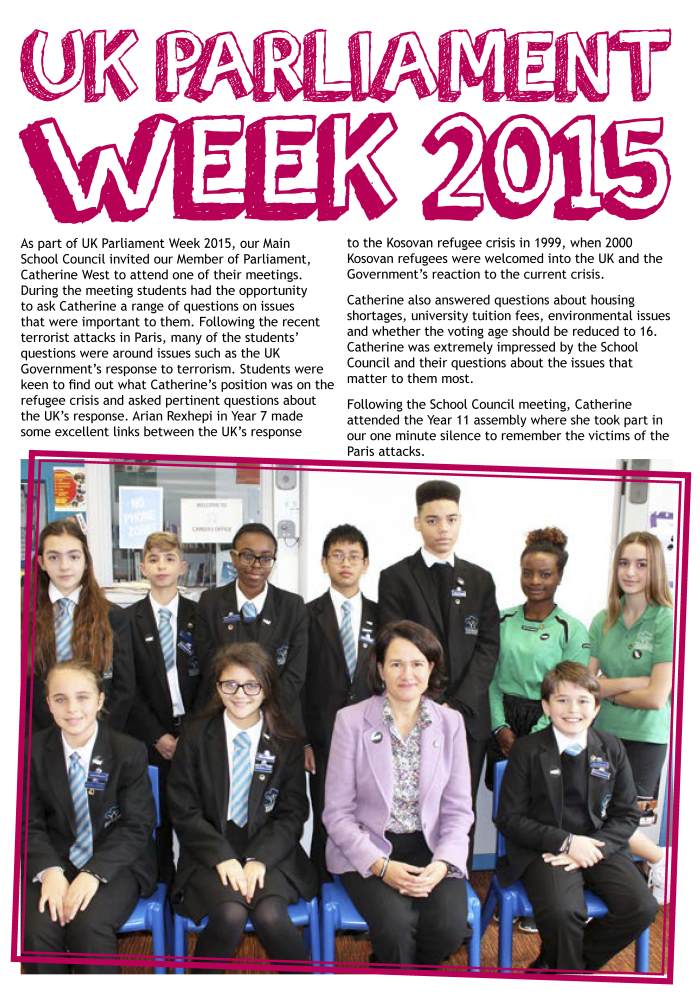 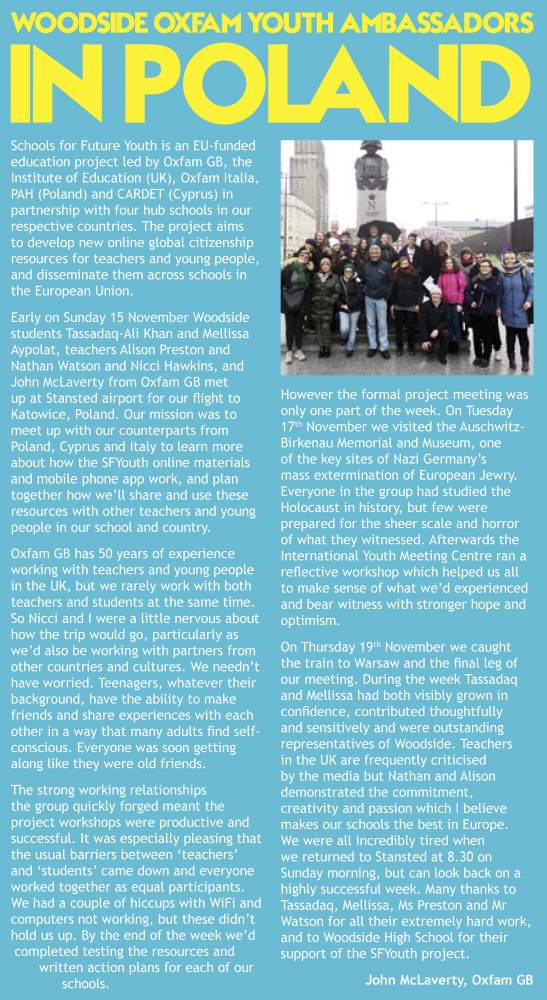 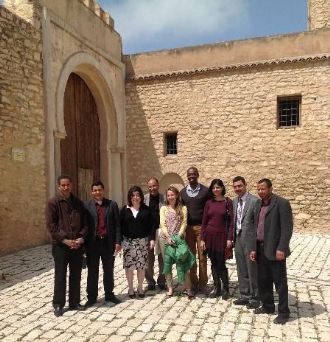 Woodside High School and Tunisia are involved with the connecting classrooms project. Students from Woodside High school are sharing information and knowledge gained in the classroom with their international partners. The idea is to create a global classroom and encourage our students to become global citizens.